I cut the sleeves off my Galaxy dress! 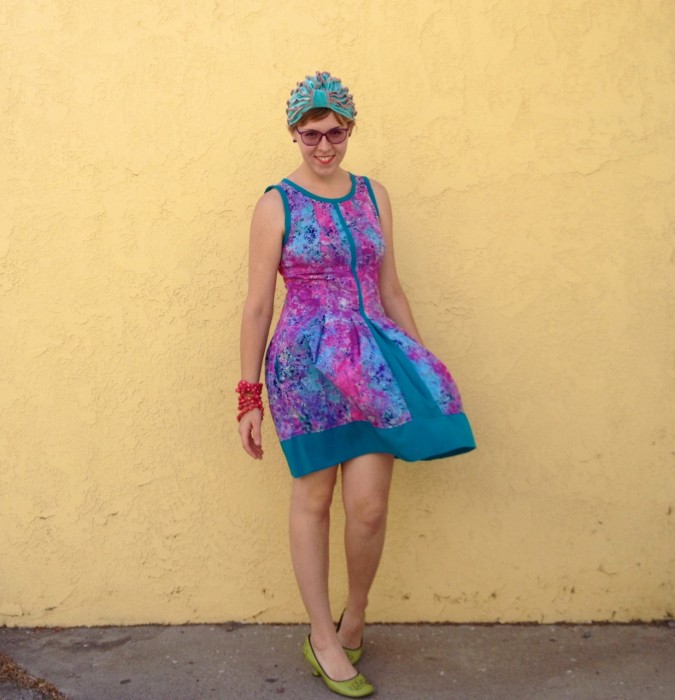 I have such a bad habit of cutting my sleeves and shoulders too tight! I like that slim look, but it makes the garment uncomfortable which makes it stay in my closet. Even though I knew that the sleeves weren’t working for me, I was reluctant to remove them. It meant admitting another failure, and there was no going back. But in reality, it was improving the fit of a great dress, like the ol’ caterpillar/butterfly scenario. Lately I’ve been focusing on identifying and removing roadblocks in my life, and small projects like this can really help with momentum for bigger changes. 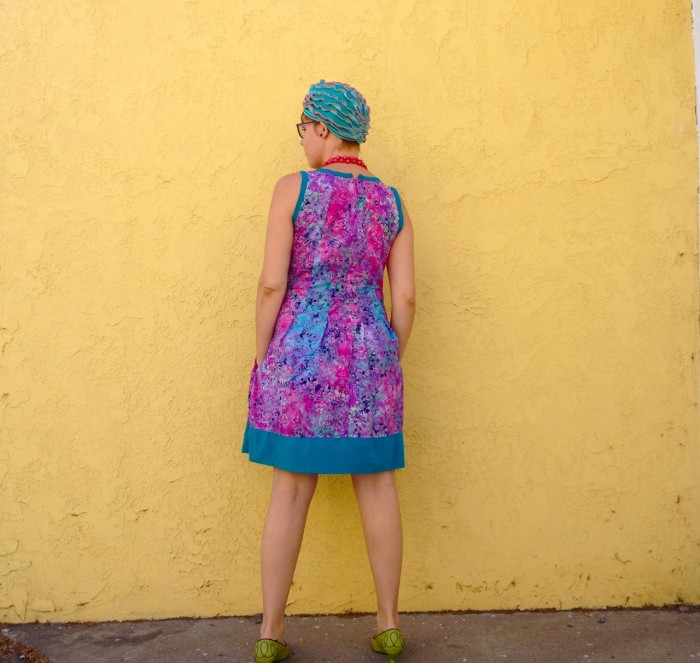 The sleeves were nice, but maybe all that cotton candy tie dye was a little overwhelming. Since the neckline of the dress is high, it’s really great to have more skin exposed, and now this dress will be even more wearable. 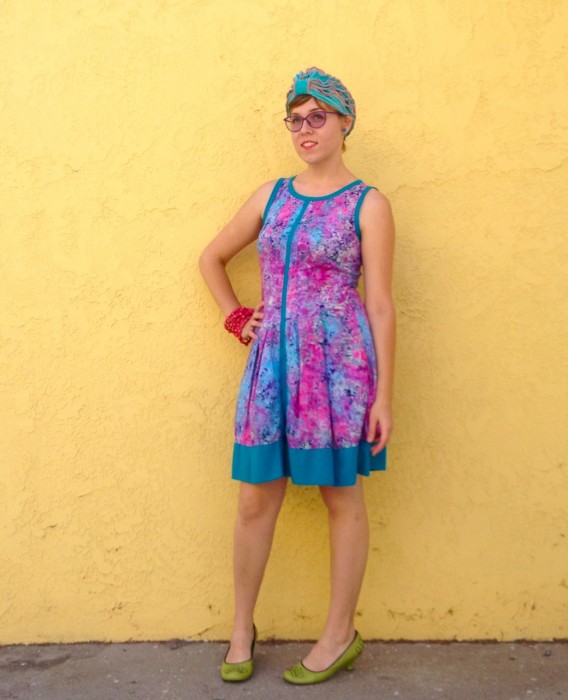 I’ve enrolled in Craftsy’s Sew the Perfect Fit class, and eventually I will actually go through the lessons. This will be the first time in my life to have ever taken a formal-ish sewing lesson! Everything I know I picked up from my mom, and years of trial and error. Hopefully there will be properly fitted sleeves in my future! Of course, this will have to wait until after Burning Man. So many plans for September! 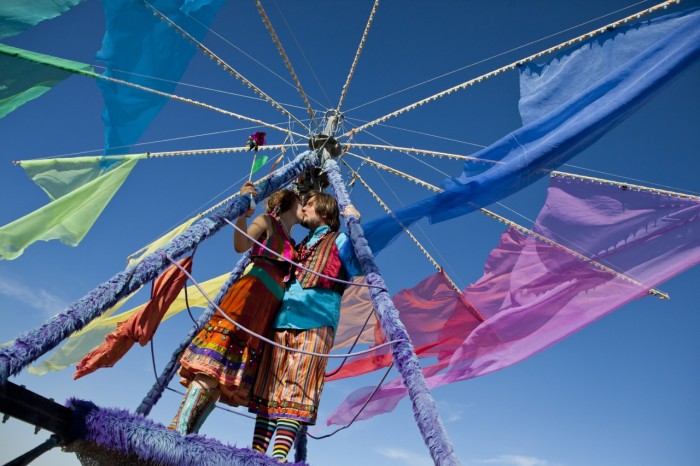 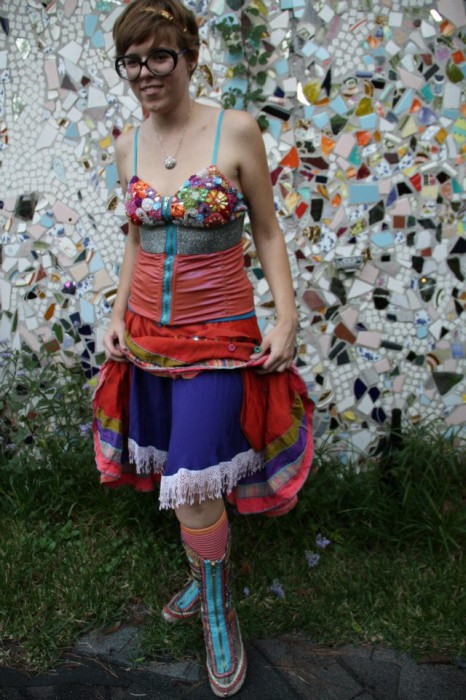 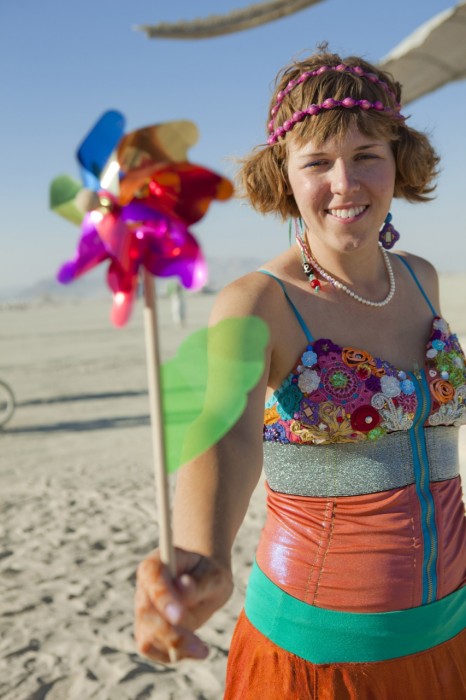 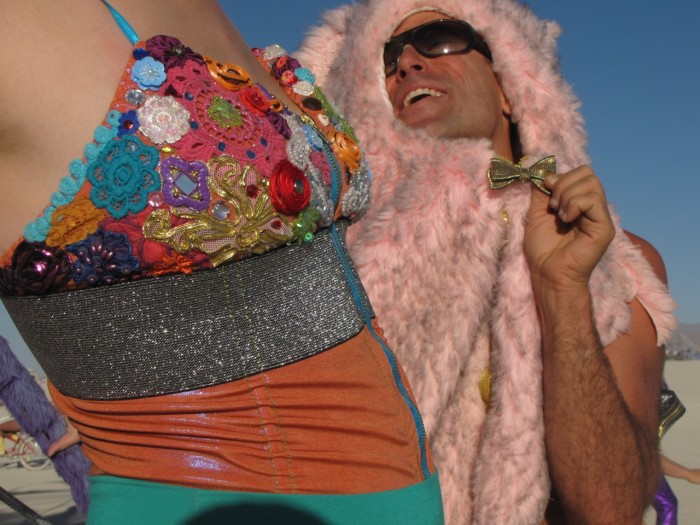 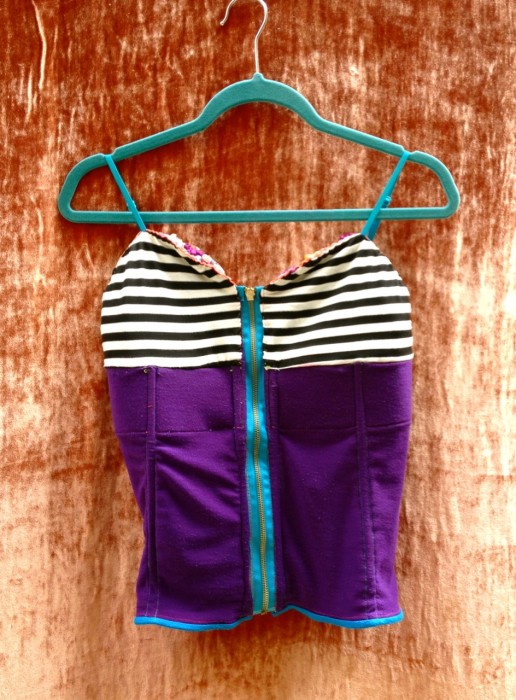 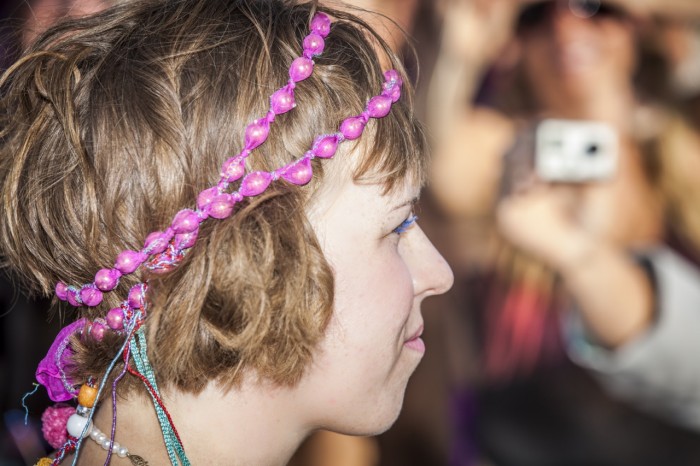 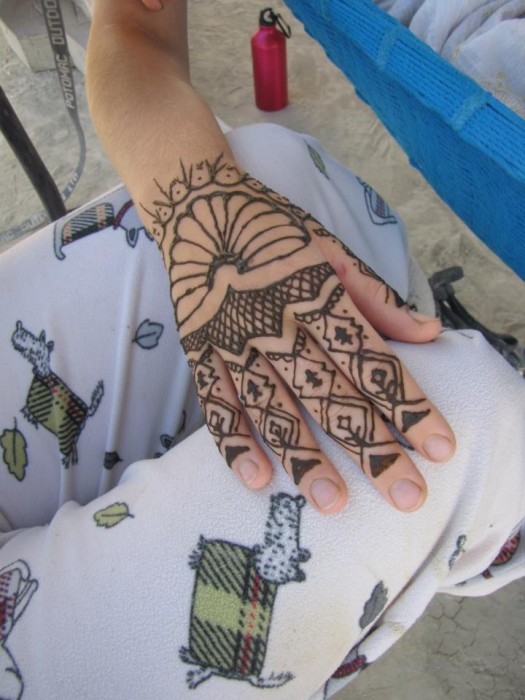 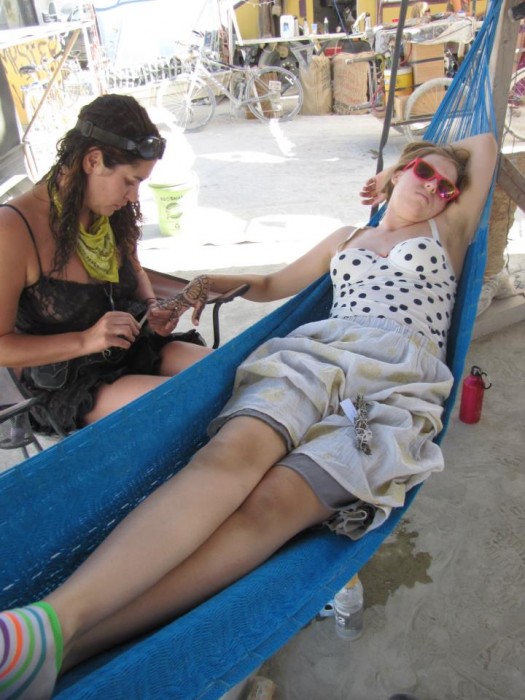 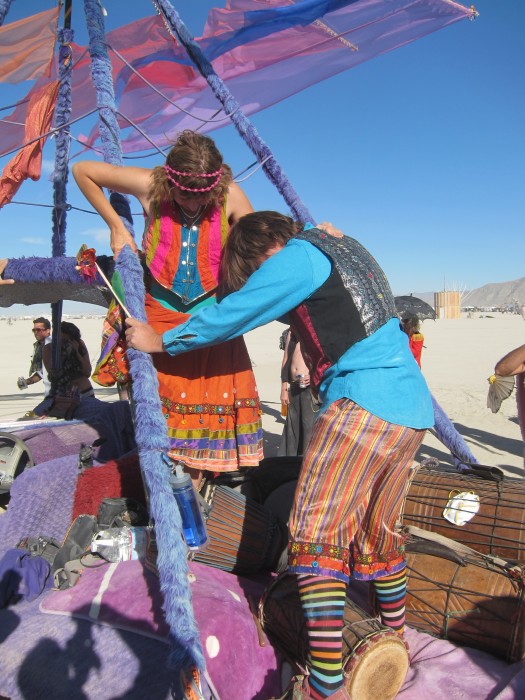 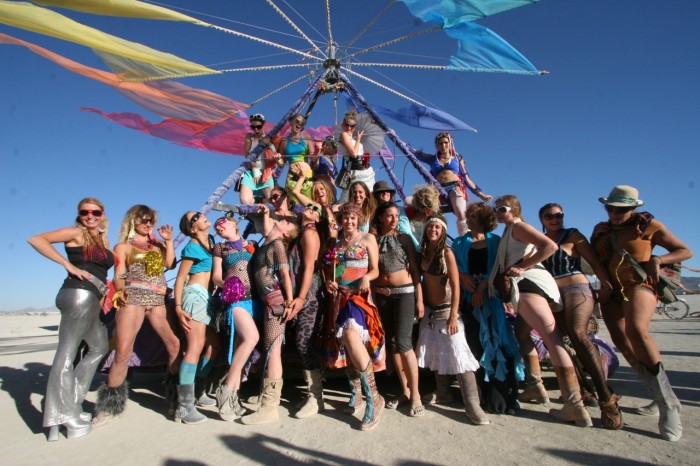 It’s a cross between a pillow and a pouf, which I suppose makes this creation another tuffet! My friend Mary requested a rainbow pinwheel pillow, and I eventually obliged. 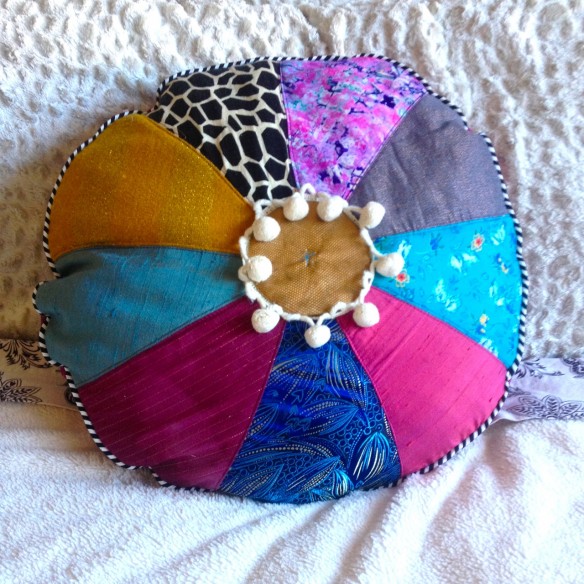 It’s made entirely of scrap fabrics. The triangles were sewn together, and then topstitched onto a backing of blackout fabric (it was the right weight and I had 2 yd lying around). END_OF_DOCUMENT_TOKEN_TO_BE_REPLACED 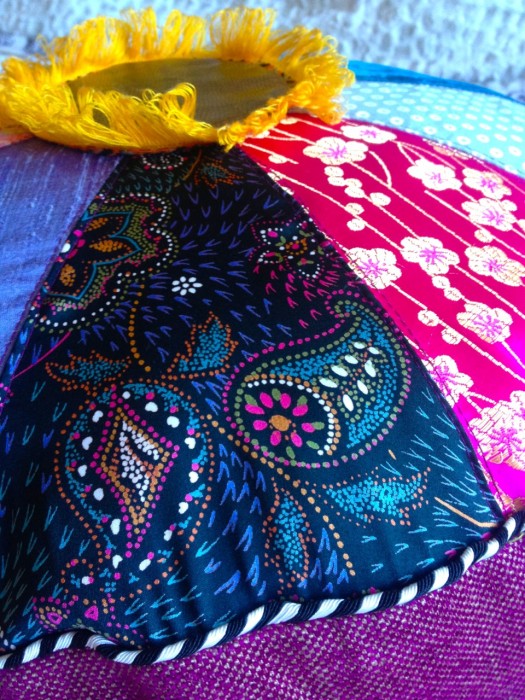 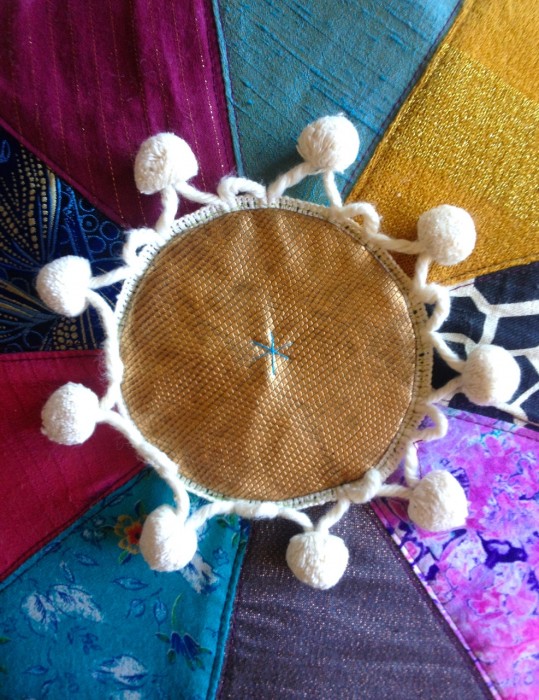 The trims were all in my stash as well. And even stash-bustier, it’s stuffed with shredded fabric! There’s a tiny bit of mystery poly-fil in there as well.

The shredded fabric was all diverted from the trash can: ugly or tiny scraps that I cut into ~2″ squares and tossed in a bag over the course of a few months. It builds up really fast! However, all that fabric is HEAVY, so this wouldn’t make a good stuffing for your bed pillows, but maybe for plumping up seat cushions.

Mary just graduated and moved up to Santa Cruz with her fiance, and I finished it in time to give her as a going-away/congratulations gift.

I’ve been non-stop busy with work, but either it’s not interesting enough for a blog post, or it is but I signed NDAs, or I haven’t had time to post it!