I love a client who keeps requesting sparkly nipples and prominent crotches on her costumes. It’s funny, gets a great reaction, and I have a great time making it. Lady LEWD has expanded her wardrobe of sparkly nude suits! For Krewe du Vieux 2017 she’s a Mardi Gras disco humpin’ Camel Toe! 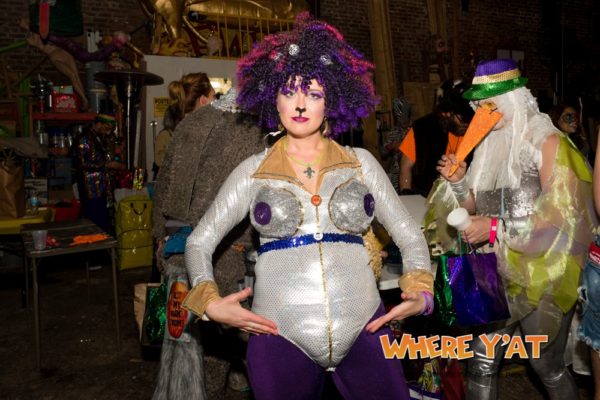 Her boobs, butt hump, and crotch are stuffed with polyfill, and I used sequin fabric for a disco ball effect on the humps. The bodysuit has a snap crotch and is worn over leggings. I also made a set of over-the-knee legwarmers out of purple faux fur but it turned out to be quite a warm evening.

The tail is made from lycra and gold float fringe and is pinned onto the hump. 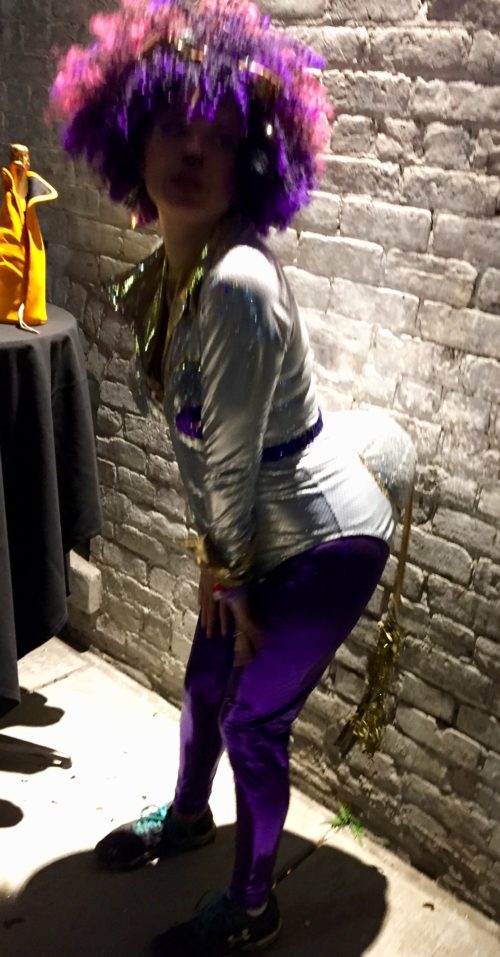 The camel toe concept was Panika’s idea, and she handed out Camel Toe buttons. She styled the wig and did her own makeup as well! 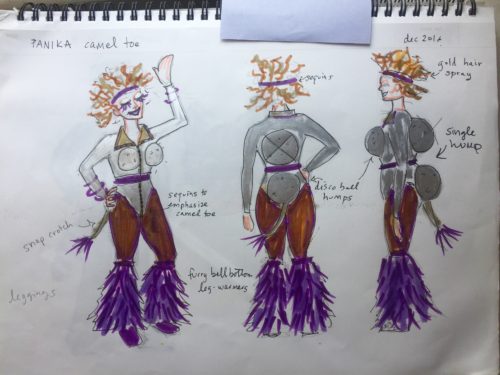 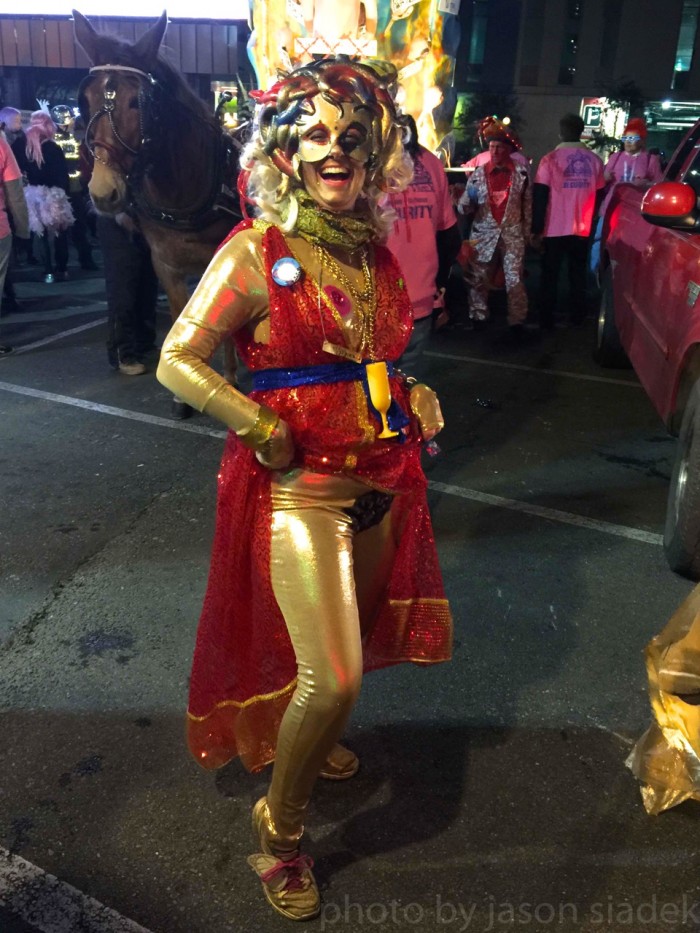 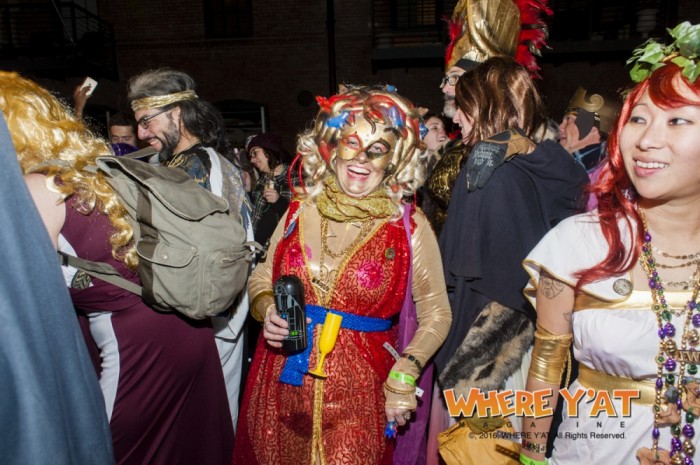 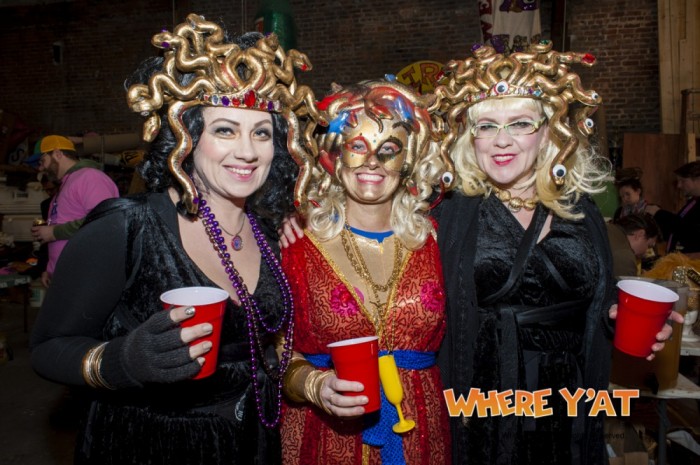 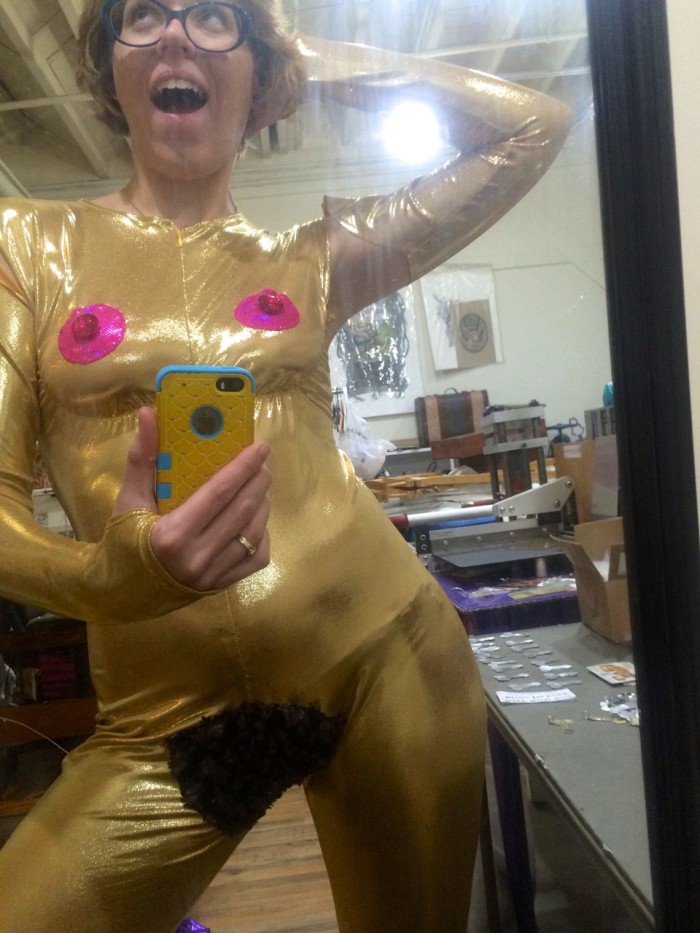 Oh my, how I love this new pink bodysuit! It’s the only complete costume I made for Burning Man 2010 (all other costumes had their debuts elsewhere). You bet your ass I listened to a lot of Bowie while making this. 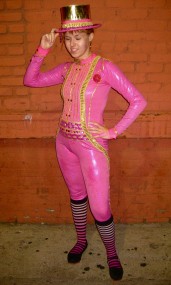 These pictures were all taken at a Burner Halloween party in downtown LA, with Jason as an exterminator and Cosmo as a space bunny (I made Cosmo’s suit as well). I’m totally impressed that Jason was able to get pictures this good in a dark alley! 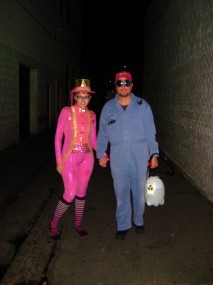 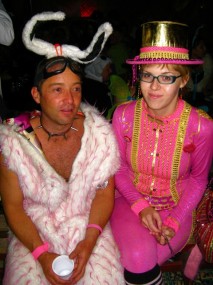 Unfortunately all the supplies for this suit were purchased new, but on the bright side it was less than $25! The fabric is from Joann’s, while most of the trimmings are courtesy of Fabric Planet. It was an incredible amount of pinning to get everything laid out correctly! The thick gold braid was sewn on with my machine (and strategically placed to offer bust support), while the gold ribbon was sewn and glued. 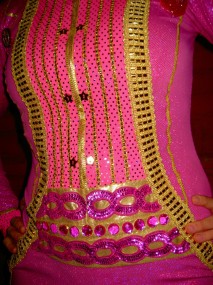 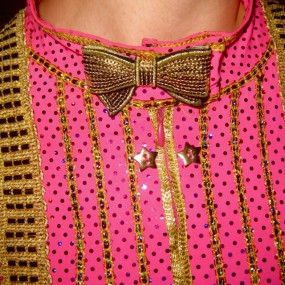 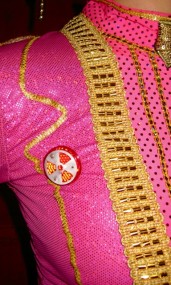 There’s an invisible zipper down the front, which is made even more invisible by the gold ribbon with the star buttons on either side. I flip-flopped between a rainbow or a simpler color scheme, which explains the multicolored trim for the shirtfront shirring. The gold sequin bowtie was a very timely arrival at Fabric Planet, and my friend Maria Fomich made the nuclear reflector pin for Burning Man.

I love how the cummerbund turned out! It’s a fuchsia sequin chain applique and matching rhinestones on ruched gold lycra. There was an incredible amount of engineering involved in that. I had to negotiate the shortest possible zipper length, because I didn’t want the belt split completely  but I still needed to take the suit off easily. I tried to make the design dynamic but not distracting from the rest of the costume. Another goal was that I hoped the carefully placed decoration would hide some slight belly bulge, and I’m very satisfied with that.

In addition to looking fabulous, this bodysuit is also very comfortable. Originally I cut out the torso a bit too short, and so I had a definite camel toe that was mentally and physically uncomfortable. A diamond-shaped insert at the crotch took care of the tightness, and now I’m right as rain with full range of motion.

The epaulets weren’t part of my design but they were too perfect to pass up. I painted the brass circles with some magenta acrylic paint and added a dab of glitter nail polish and they fit right in.

The gold top hat was made out of cardboard to go with the costume, because I simply couldn’t go out without a top hat! Now all I need is a cane. That lights up and shoots lazers.