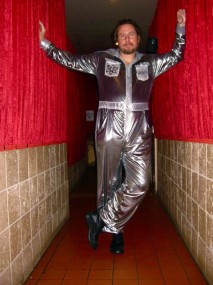 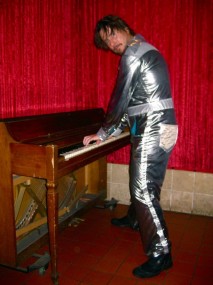 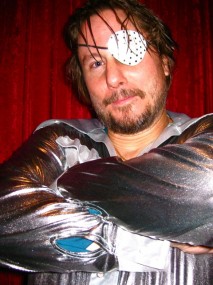 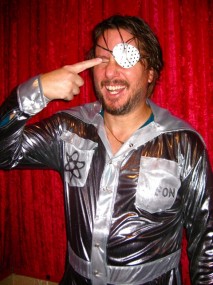 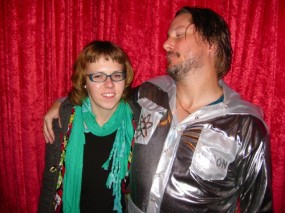 So I came up with this idea on the looong drive back from Burning Man (2,500 miles=lots of time to think). Fungitron debuted at Halloween but its real venue is Burning Man, with a planned appearance at Mardi Gras along the way.

These Smurfs and I danced in the street to the Fraggle Rock theme song.
END_OF_DOCUMENT_TOKEN_TO_BE_REPLACED

I wore it to Voodoo Fest during the day, which was awesome! People kept coming up to me to pose for pictures; I was the unofficial mascot of a music/head shop called The Mushroom; at the Gogol Bordello show I really stood out and was easy to spot on the jumbotron, as well as by the band! Also I was interviewed for a spot on Fuse TV, which was pretty cool.

The bodysuit is silver sequins lined with nude spandex. I added silver rick-rack and some rhinestones for extra pizzazz. The hood is not attached to the suit.

The cap is paper mache! The white spot are cut out of milk cartons and actually cover little bowls, which eventually will have LEDs in them. For Halloween I put in glow sticks, so I really stood out at the festival and on Frenchman Street later that night.

Of course, there had to be a utility belt. My friend came over and borrowed another bodysuit. My boyfriend bought our socks.

For about a year and a half I’ve been eying some glitter Spandex at Joann’s, knowing exactly what I would make out of it if I could only find the excuse. Well, this year I went to BURNING MAN. It was insane; it was incredible; it was indescribable! And I was well dressed.

First, here’s a shot from the desert, with the fabulous Cosmo:

As it turns out, you don’t have to have a great body to prance around in a bodysuit. Stick anything in 2 yards of sparkly spandex and it’s fabulous. I got more attention wearing these than when I walked around naked.

END_OF_DOCUMENT_TOKEN_TO_BE_REPLACED

The outfits were interpreted in so many ways, as a fish/mermaid suit, as an astronaut, as an alien (especially when I was in the rocket), and a superhero. It was actually pretty cold at night and my silver fringed arm warmers didn’t do much, so when I wasn’t dancing my tushy off I was snuggled up in a teal robe.

I didn’t use a pattern on these but they fit perfectly. I loved being able to change the attitude by the height of the zipper (I did wear it around with the zipper completely open). Also I whipped up a silver utility belt, which was so useful! I kept food, a camera, toilet paper, a knife, and all sorts of little essentials on hand.

The blue one was second and came out much better. It only took 90 minutes from start to finish (excluding the sequins at the collar). Also on this one I figured out to use the 3-stitch zig zag, which worked so much better than the regular zig zag!

Since I didn’t get a lot of shots at Burning Man, yesterday I suited up again and played in the neighbor’s tree house.

For next year I am going to have a different color for every night. Also, I’m thinking about putting in a much longer 2-way zipper to go from the neck all the way to the back, so that using the porta-potties isn’t such a hassle.

This is going to be great for Mardi Gras!

By the way, I totally wear these around my house and when I visit the neighbors. They’ve gotten used to it.