Searching through Ravelry one morning, I was instantly smitten by this charmingly eccentric hat: Cat Bordhi’s Anemone. What’s not to love? There’s the elegant twist of the moebius brim, the wonderful bunching of rows of knits and purls, and of course, all those fabulous tendrils springing out from my head like a million brilliant ideas. 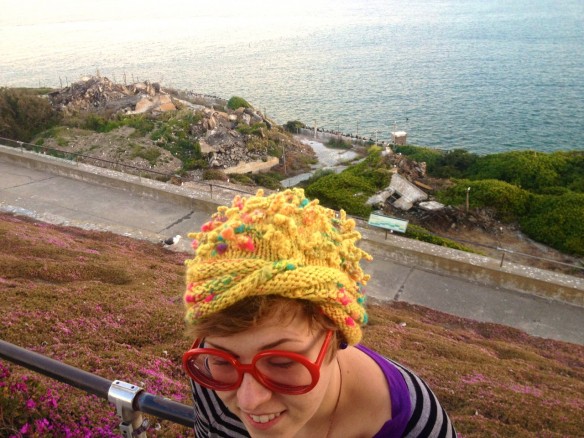 END_OF_DOCUMENT_TOKEN_TO_BE_REPLACED

This picture is quickly becoming my favorite picture of me. We took these pictures at Alcatraz a couple weeks ago. My dad and stepmom were supposed to fly in from Massachusetts but had to cancel at the last minute, so we went on the tour for them. 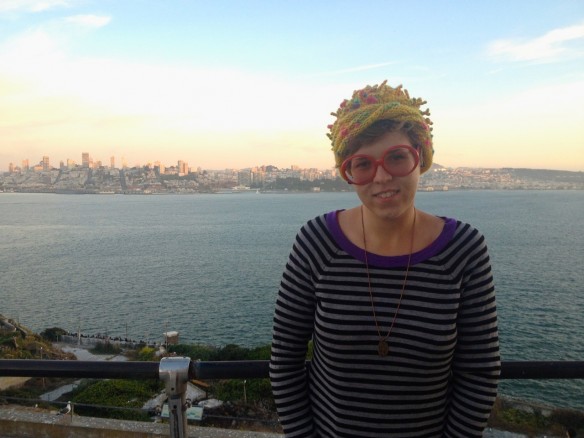 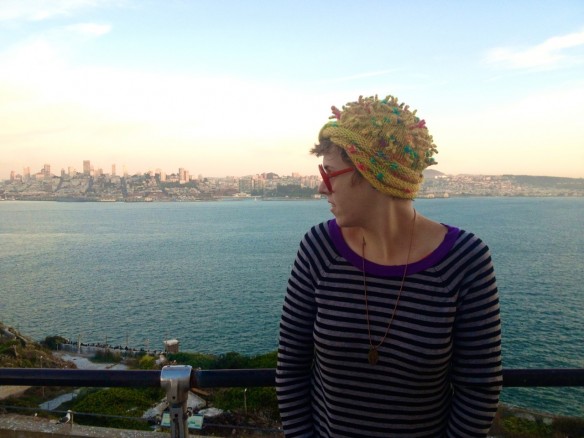 I love the moebius brim! You wind up knitting it from the center row out, so that instead of it growing from top to bottom, the rows are added to the top and bottom. It was a little tricky, but Cat Bordhi’s tutorials were clear to follow.

I have a gorgeous fuchsia yarn that I think would be great for this design, except it’s not superwash (the hat should be washed in a machine to plump up the tendrils). So I wanted my first rendition to follow the directions, which is laughable in retrospect and should have been obvious up front. I know who I am, and someone who follows directions when making something is not my style. 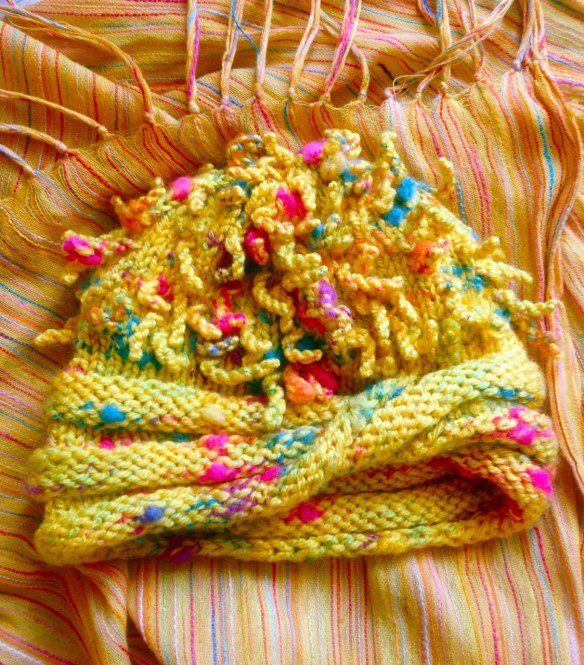 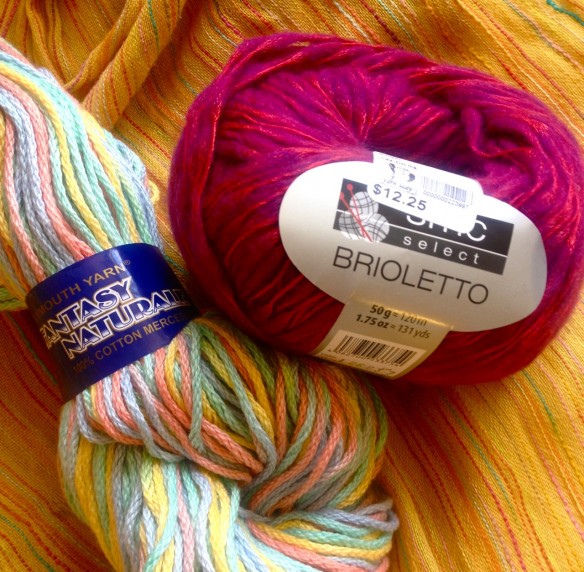 I love the rainbow slub of this chunky yarn, and it matches a scarf I bought in Florence in 2005. The yarn came from Micheal’s, and I believe it was on sale. I kept the sleeve while I was knitting and threw it away without a single thought about blog posting. I do remember that the colorway was “Tempo” and it’s a wool/ploy blend (I think 50/50). However, it’s much thicker than the recommended worsted weight, some sort of chunk, but for some reason I didn’t think that would be a problem, so I got to work on the brim. 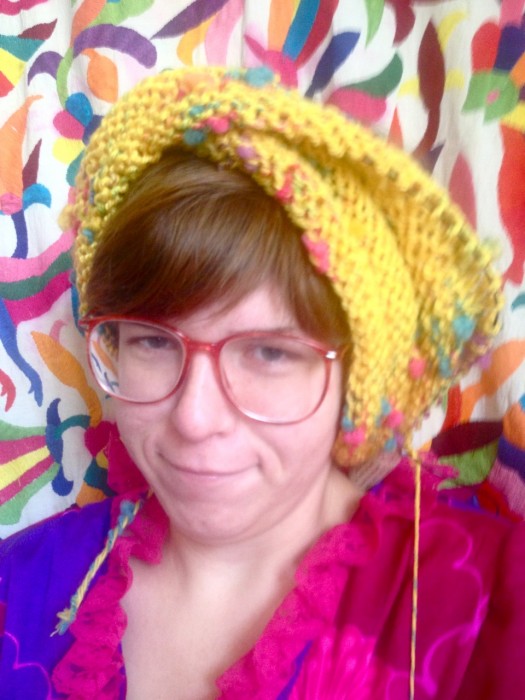 Sans gauge swatch, my first attempt was way too big. Two guage swatches later, I realized that even the tiniest needles weren’t going to make this yarn worsted weight, and so using US#5 needles I just made the “baby” size. I wound up doing just one series of the tendrils (in each spot in the row) before beginning my increases. It fits perfectly! 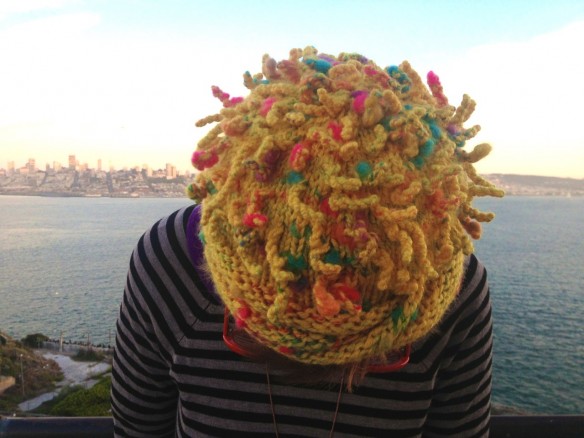 My tendrils seem to curl a little bit, which I think is cute and due to either the uneven thickness of the yarn or unevenness of my twisting. With this yarn at least, I didn’t notice any difference after washing. I’m definitely looking forward to making this hat again with recommended yarn, but first I have two other yarns in my stash that need to be worked up!

I love this hat and wear it whenever its chilly at night in LA. I tend to get a lot of stares when I wear this hat out, which can be disorienting, because they seem to be of the “what the fuck is that hat?” nature. Whatevs.

As soon as I started knitting, I was most excited about knitting things to wear at Burning Man. I love showcasing my sewing projects on the playa, and it’s great to have a new medium to get creative with. Of course I’m wearing this turban off the playa too!

I’m so pleased and proud of how this hat turned out. It’s actually my fifth hat, and used the smallest needles yet (and therefore had more stitches than any other project). 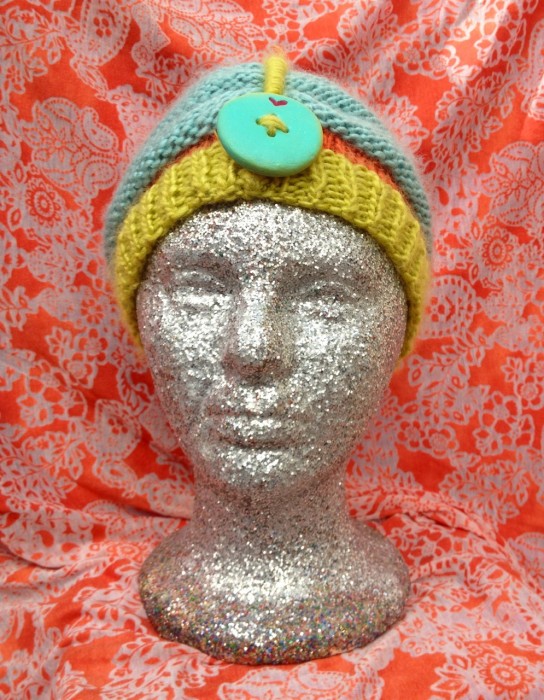 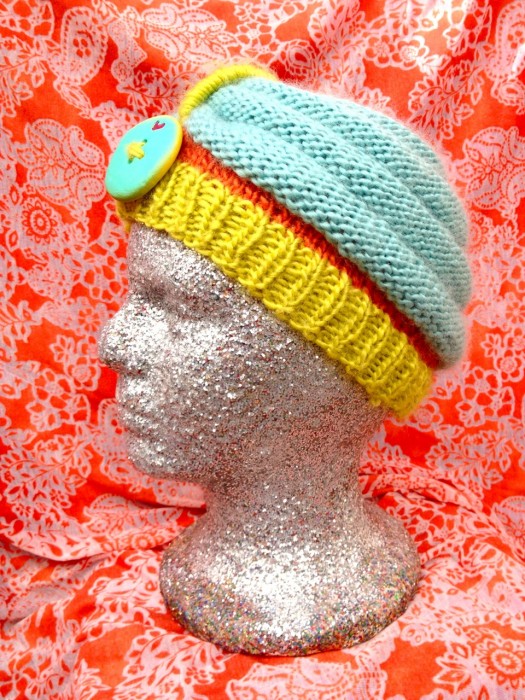 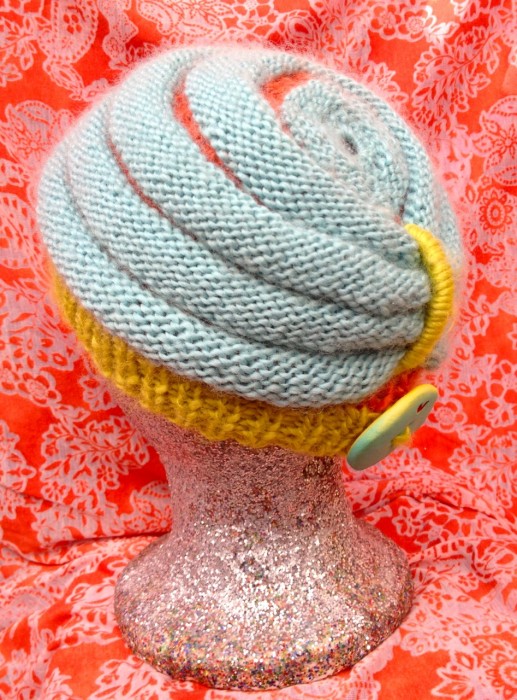 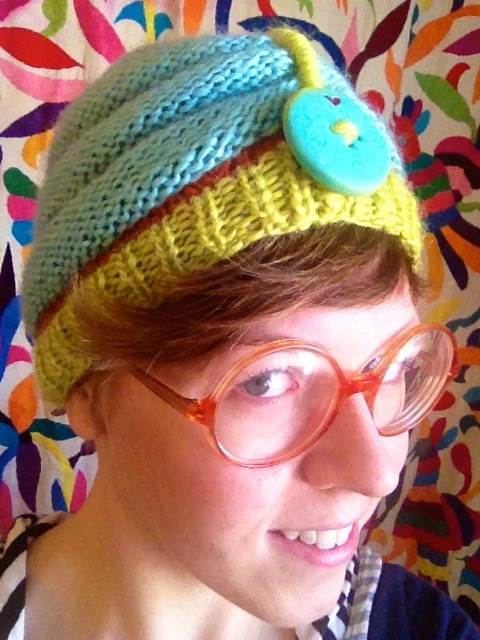 The Striped Beehive Turban was designed by Christine Grant. I’m still new to reading knitting patterns, but hers was easy to follow. I knit the ribbing with 72 stitches, then increased to 84 for the orange and blue bands, and it fits me perfectly. I chose to gather from the radius and covered my awful seaming, and wrapped those stitches in yarn (from the side, it reminds me of an angler fish). 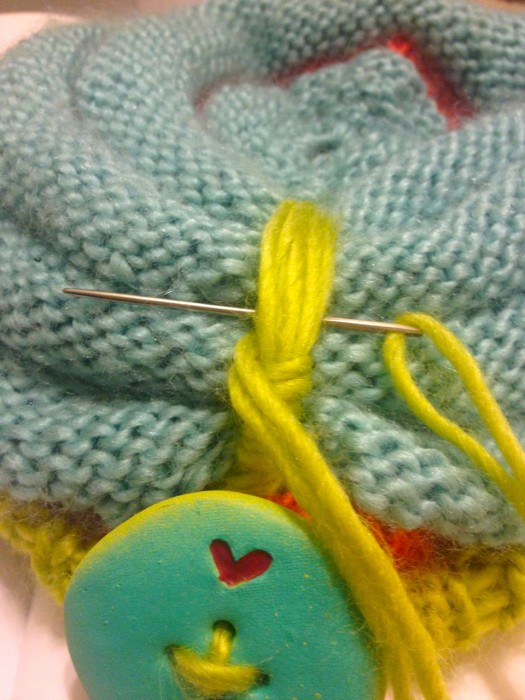 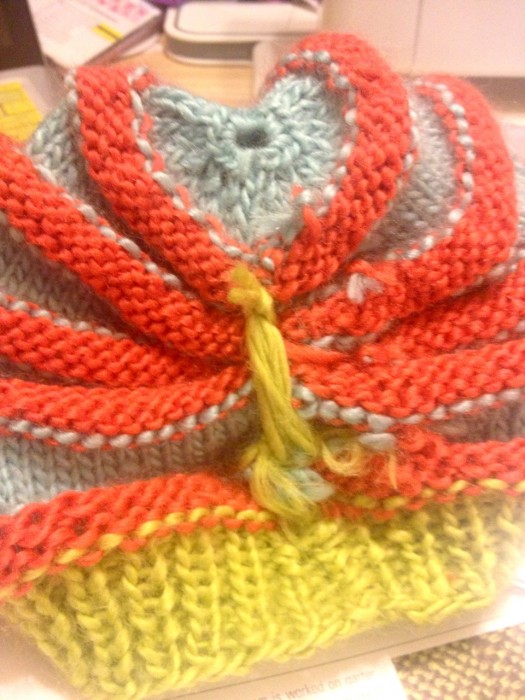 I picked Sheep-ish yarn for its bright colors and soft feel, plus it was on sale at Joann. The yarn is pretty loosely twisted, so I’d be afraid of pilling if I were to use this yarn for a garment. Also, I kept getting my wonderfully pointy new needles stuck in the yarn. So while I might not buy this yarn again, I think it was a great choice for this project. 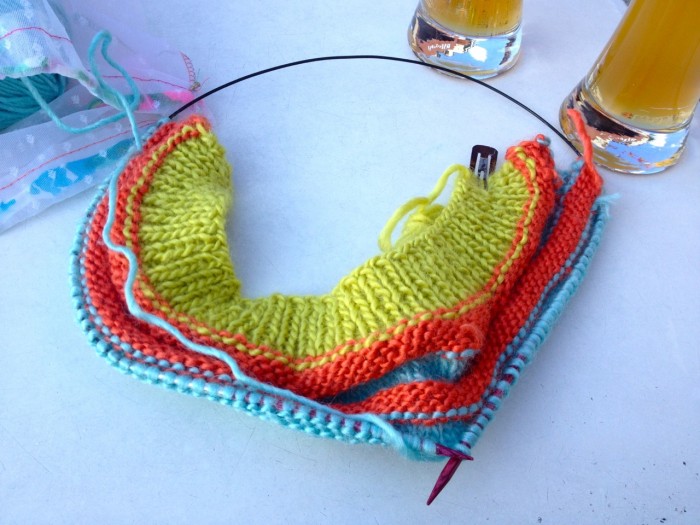 My friend Shing made this clay button as a wedding gift (she also made the rocket pendants on our chandelier). It perfectly matches all the colors, although it didn’t occur to me to pair it with my turban until it was complete. 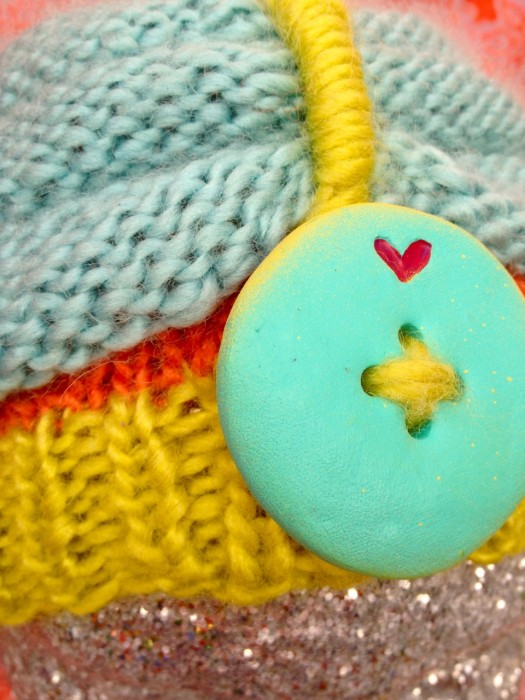 I have enough of these yarns to make a second turban, switching the colors around, and I’m thinking about making it inside out, with 4 purled rows and 10 knit rows (the reverse of the pattern). I’ll also modify the pattern to knit in the round, because I kind of like the jogged stripes, in a brushstrokes way [it reveals the technique and the hand of the artist– so glad I have a degree in art history!].

I’m pretty pleased with my first ever knitting project. It’s based on this very basic hat, but I wasn’t paying attention, missed a few steps, and decided to just continue with my own design. I’m terrible at following other people’s patterns! 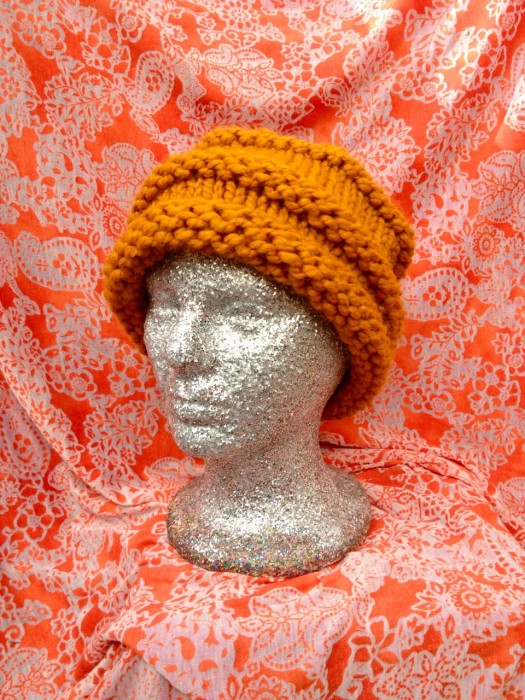 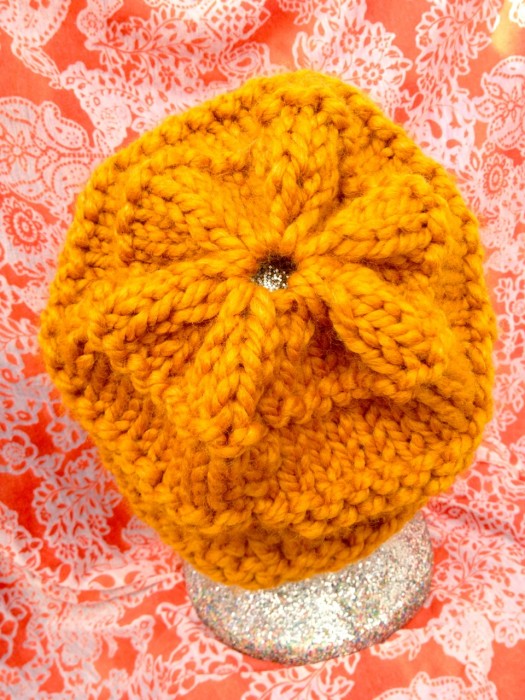 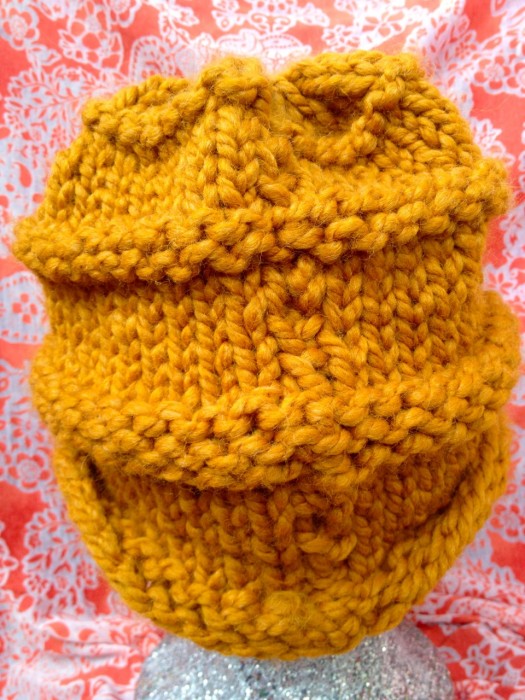 I used Lion Thick & Quick, in a 80% acryllic 20% wool blend. It was really nice to work with as a first project: the yarn held together well, it was easy to see my stitches, and the thick yarn made this hat a fast project! Plus I do love the color, and it goes very well with all my other yellow hats.

I used #10 bamboo circular needles, and then waited almost a month to sew the side seam! And I did such a horrible job of it! I know that I should learn how to do a decent job at a side seam, but in the meantime I think I’ll stick to knitting in the round.

Since I’d bought two hanks of the yarn, I decided to make a second hat (and I think I have enough left to make a third!). My second hat was knit in the round on the same needles, and I really loved the process. Near the top, I switched to DPN, which was challenging but kinda fun. I’m looking forward to trying out magic loop on my next circular hat! 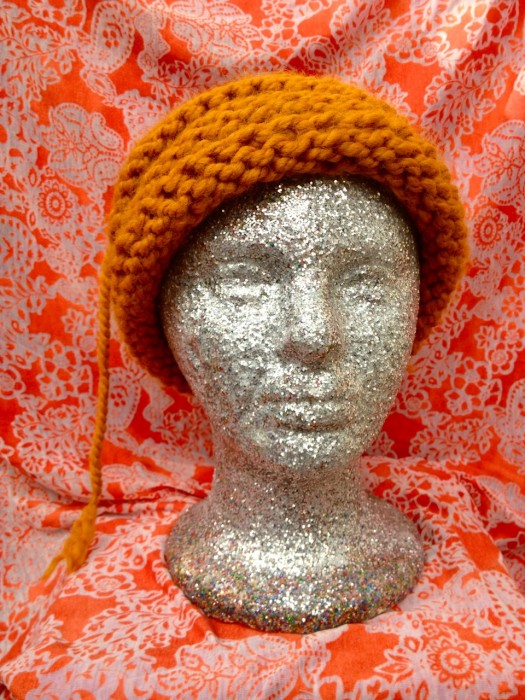 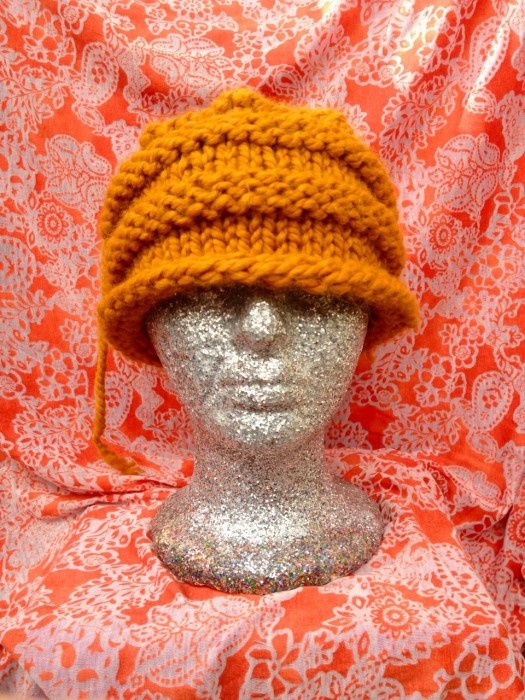 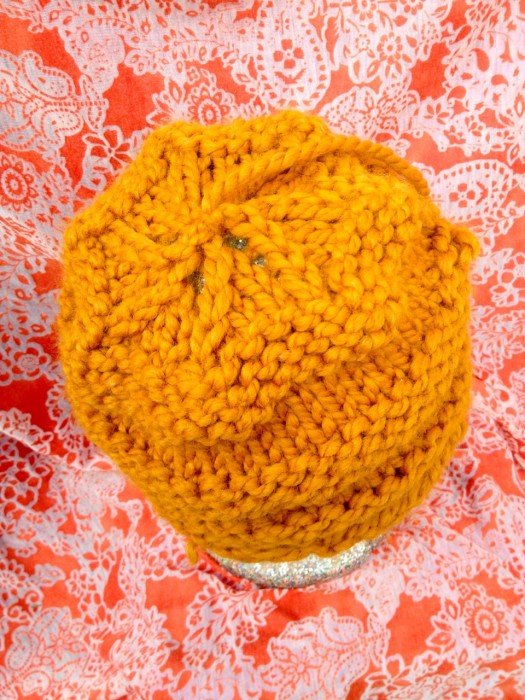 For this hat I was able to adhere to the pattern (mostly), but the hat’s too short for my head! I have some crochet needles somewhere, and once I find them I will add a band to the bottom of this hat… or maybe give it as a gift? To a child? In the meantime I’ve been wearing it in my apartment, because it’s been freezing in Los Angeles!

I’ve wanted to knit for years, but never gave myself the time and space to concentrate on it. There were a few aborted attempts that didn’t break my spirit, but let me know that I wasn’t ready yet. One morning I woke up, spent a few minutes on Knitting Help, and spent the rest of the day gleefully knitting swatch after swatch.

Based on all the handwork I do, I knew that I could knit. And it’s pretty easy, and I’m really excited about it. I’m already working on my fourth hat, on #4 needles, with stripes, and ribbing, and I can’t wait!