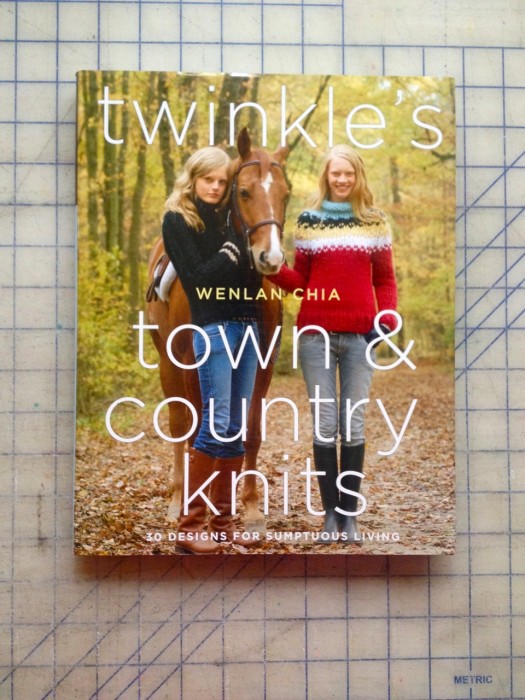 Congratulations to Francisca for randomly winning the Twinkle Knits book giveaway! She entered by liking MADE by JULIANNE on Facebook.

Thank you to all who entered my first ever blog giveaway. I’m planning on hosting a few more giveaways in the coming year, with more de-stashing prizes as well as handmade goodies. You can find out about those by checking back here or liking the aforementioned Facebook page.

For those who didn’t win this time, here’s a consolatory cat gif:

The original inspiration for these puppets was [no surprise] Burning Man. We were going to have a puppet show! But we got distracted, and did other fun things, yet the puppet-making inspiration has stuck around. 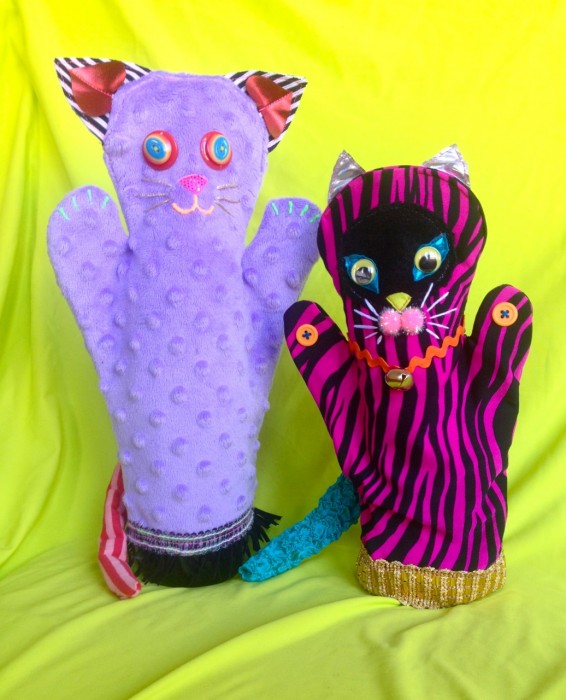 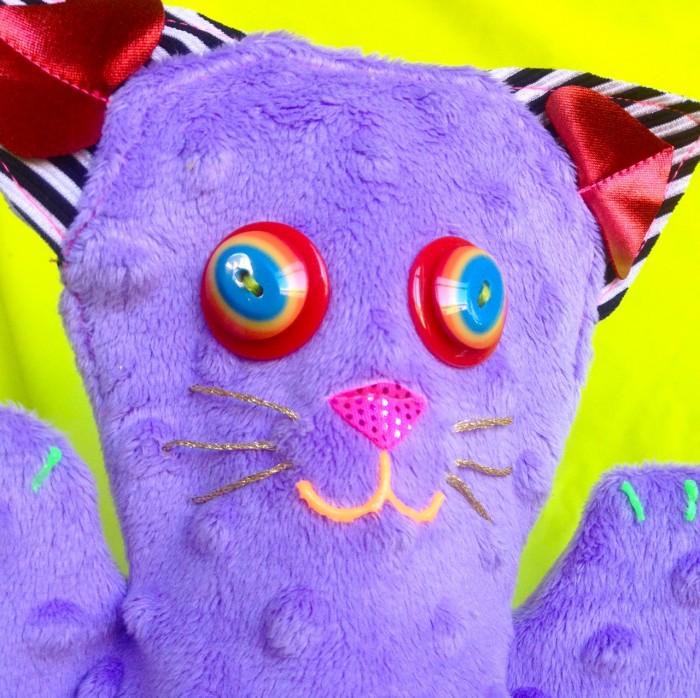 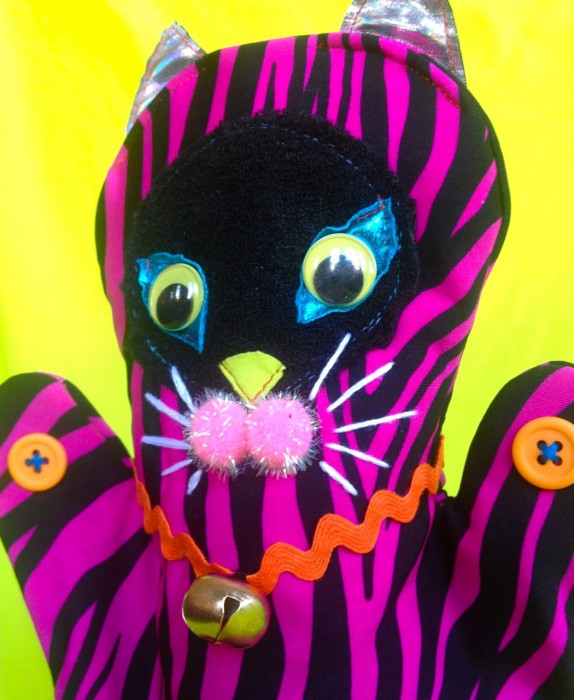 Another little project to use up neat scraps, and give as charming gifts, and always fun to get drunk and then see what the little kitties have to say about the world. 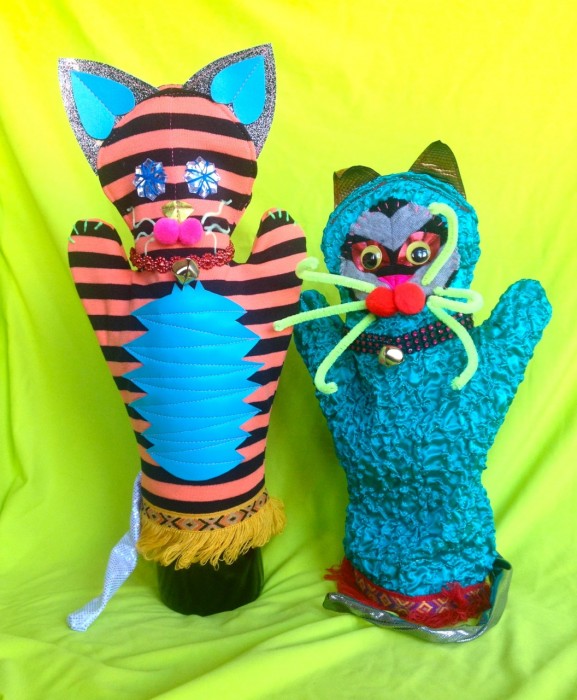 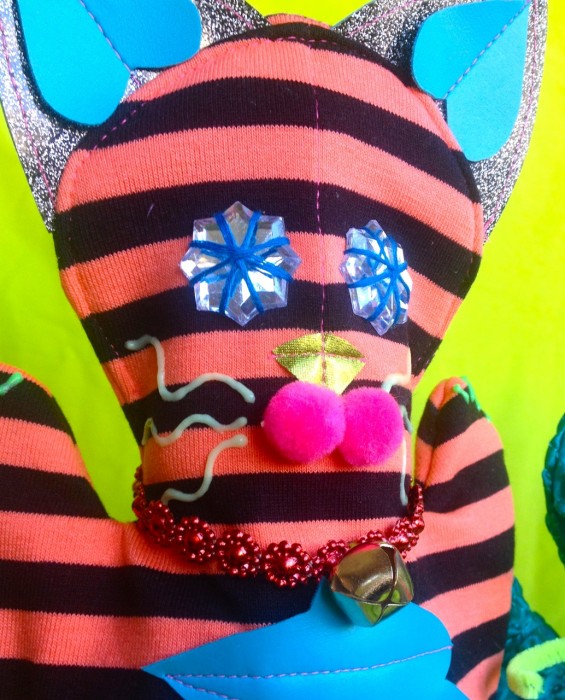 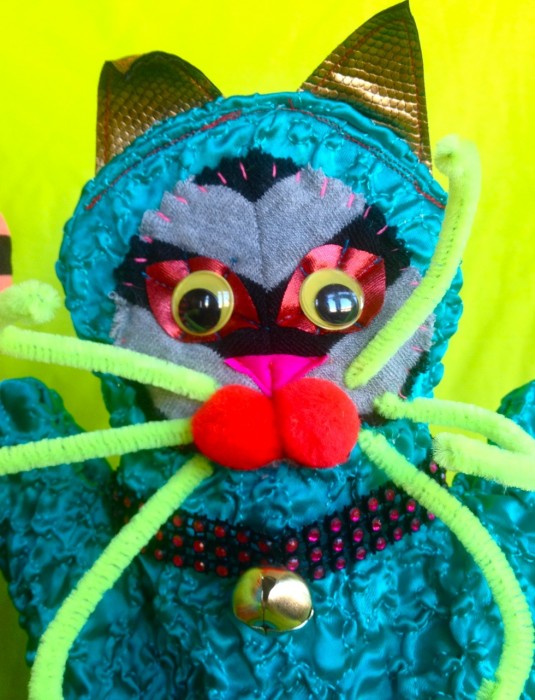 They make great liquor bottle coozies too. So if you’re really desperate, you don’t have to drink alone anymore! Another tip: they fit nicely on top of a long water pipe, if you happen to be the kind of person who owns that kind of thing. If. 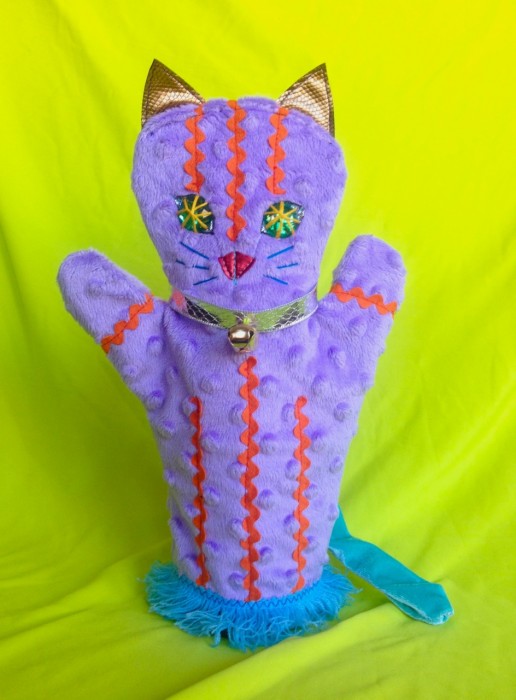 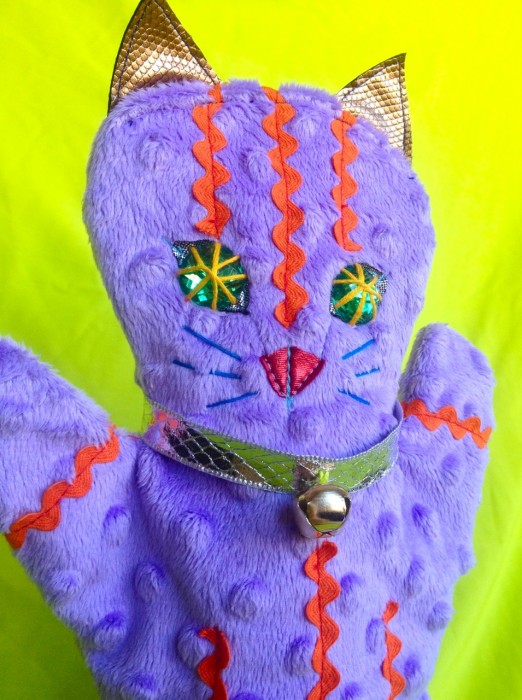 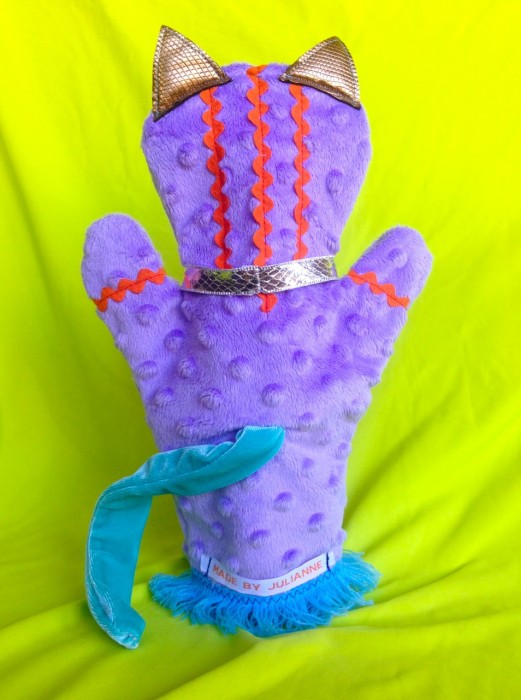 I love the pipe cleaner whiskers of course, but they are not baby-friendly, no matter how friendly the babies themselves might be. 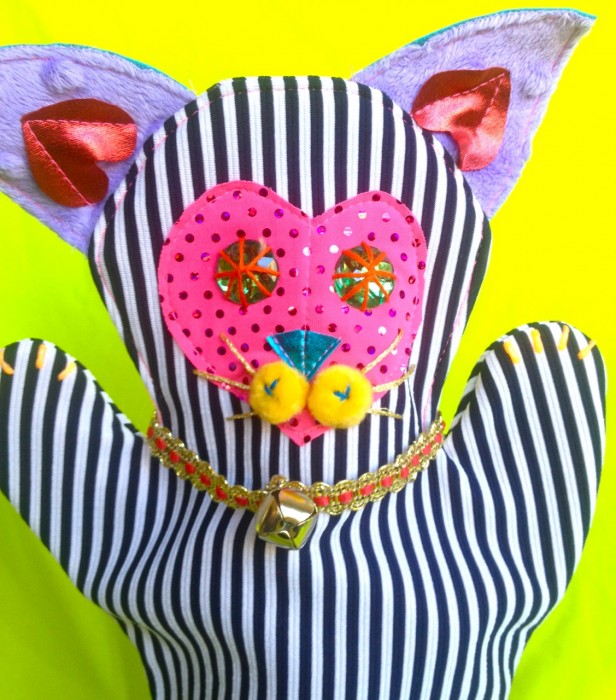 They are all cats. I’ve thought about making other creatures, mostly robots and monsters, but so far I’m really enjoying having all these damn cat puppets strewn around my space. I’m surrounded by cat puppets. 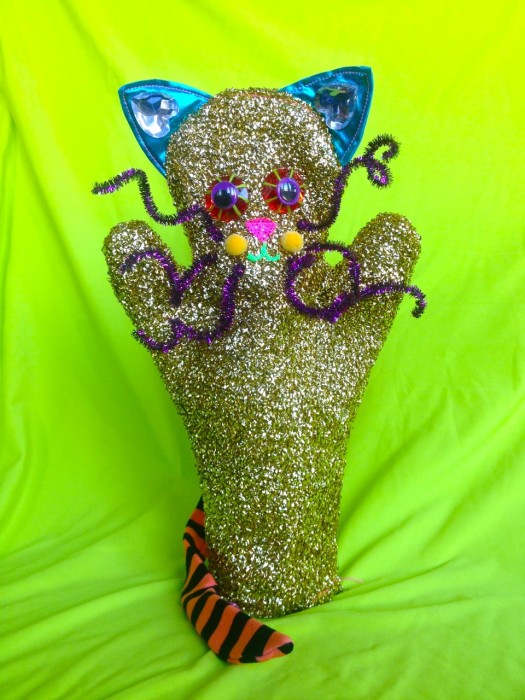 Some have names, some don’t yet. Mercy was the second-ever cat puppet, and he stays with us. He came to a funeral once, but I made him wait in the car.

Here’s the first ever: Slowjam, given to buddy Matt at his Bill Murray-themed costume birthday party (that got busted by the cops – twice!) 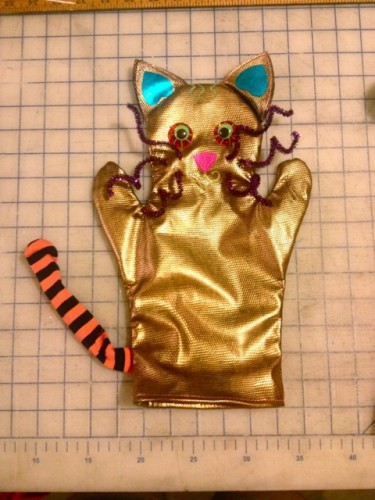 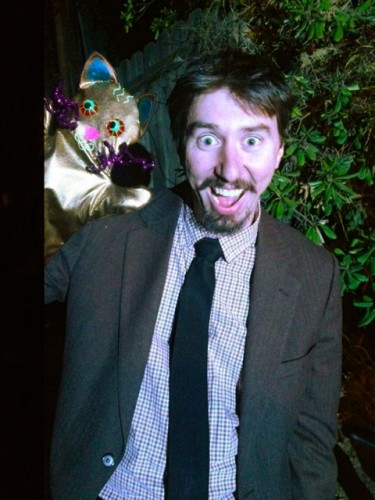 Mr. Siadek and I dressed up at Steve Zissoux. Oddly, I was the only diver Steve and the only cross-dressing Steve. I was also the only disco-version of Steve, with a silver glitter beard. I’ve gotten so much wear out of my glittery aqua bodysuit over the years. Also, damn, I feel like I look weird without glasses. 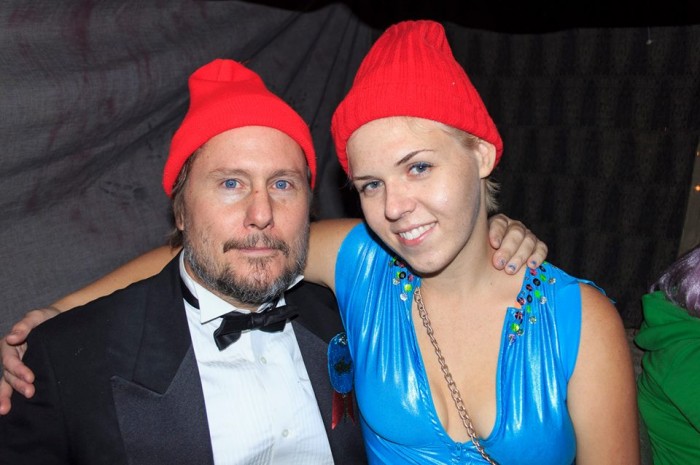 I drew this picture of a sleeping cat on a dream rug. 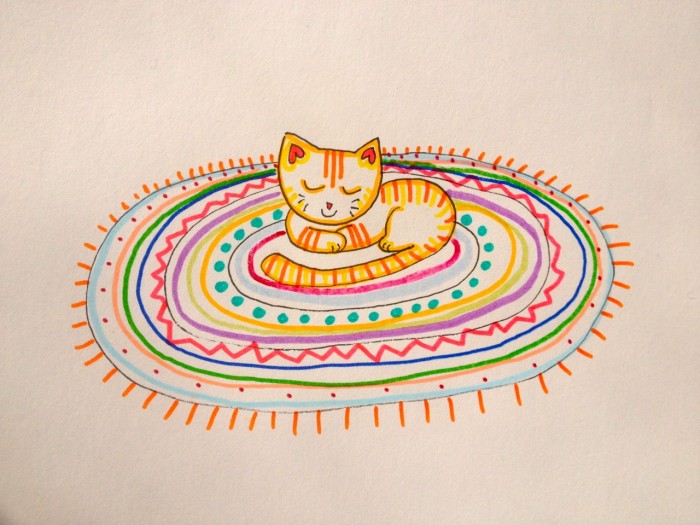 This gives me an idea for a hand puppet I need to make for Burning Man.